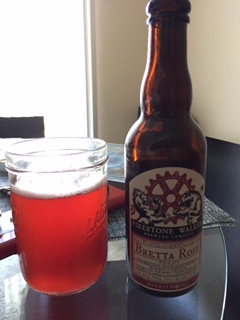 Barrelworks is arguably one of the most talented breweries in the world. Based out in Bulleton California. They are a subsidiary of the Firestone Walker and much like Firestone Walker make great beer. Other great Barrelworks releases include Lil Opal, Agrestic, and Feral One. The Bretta Rosé I first tried back on January twenty-fifth when attending a meet and greet with Jeffers Richardson. When I first had the beer I thought it was one of the best sour beers I had but since at the time I hadn’t tried a great amount of Farmhouse/Sours/Wild Ales I wasn’t sure how to scale and compare it to other beers. This beer helped shape and generate my interest in sour beer. Now that I have tried a larger amount of sour beers I feel comfortable to review this beer.

This most distinct trait about the beer after pouring it I noticed was the color. Looking almost pinkish and red the beer made me wonder how they got this color. Well using 1000 pounds of raspberries did the trick! This is done after the beer has already sat for six months in French Oak Puncheons. The beer is acidic and has funk to it like many sours but the characteristic which is astonishing is how well the raspberries meld with the other flavors to create a great sense of refreshment. This is a must have. 5/5.